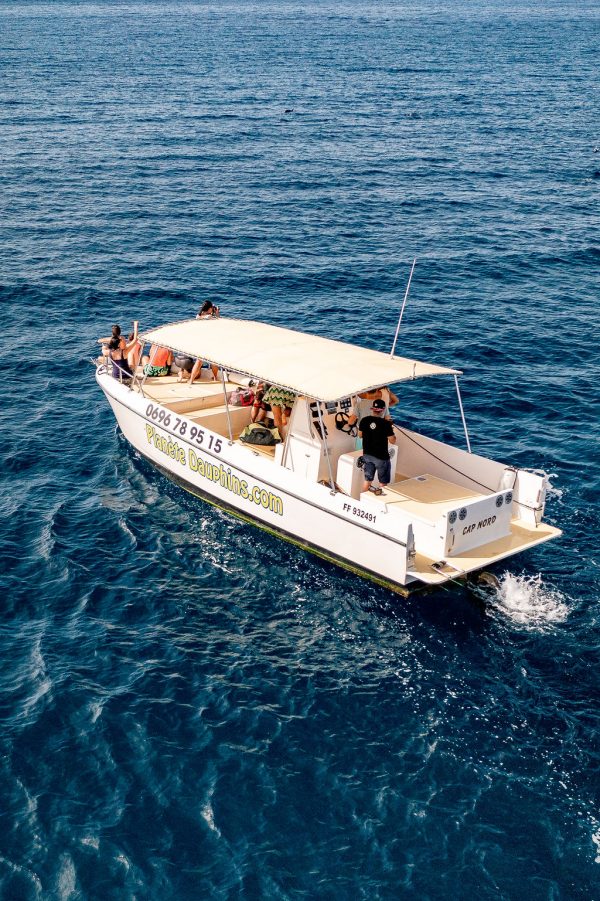 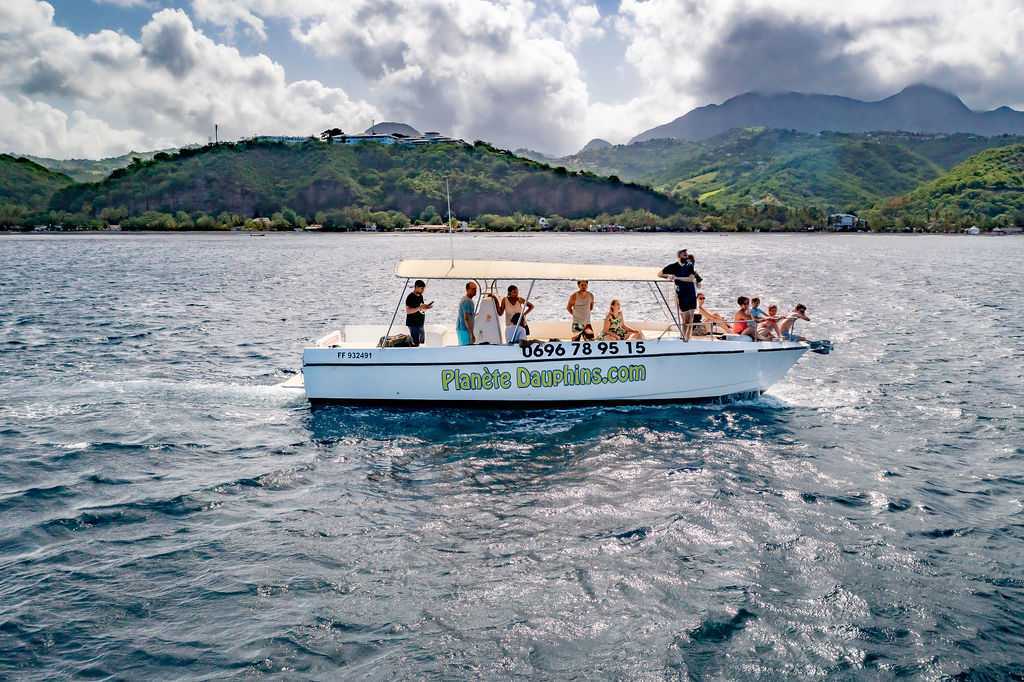 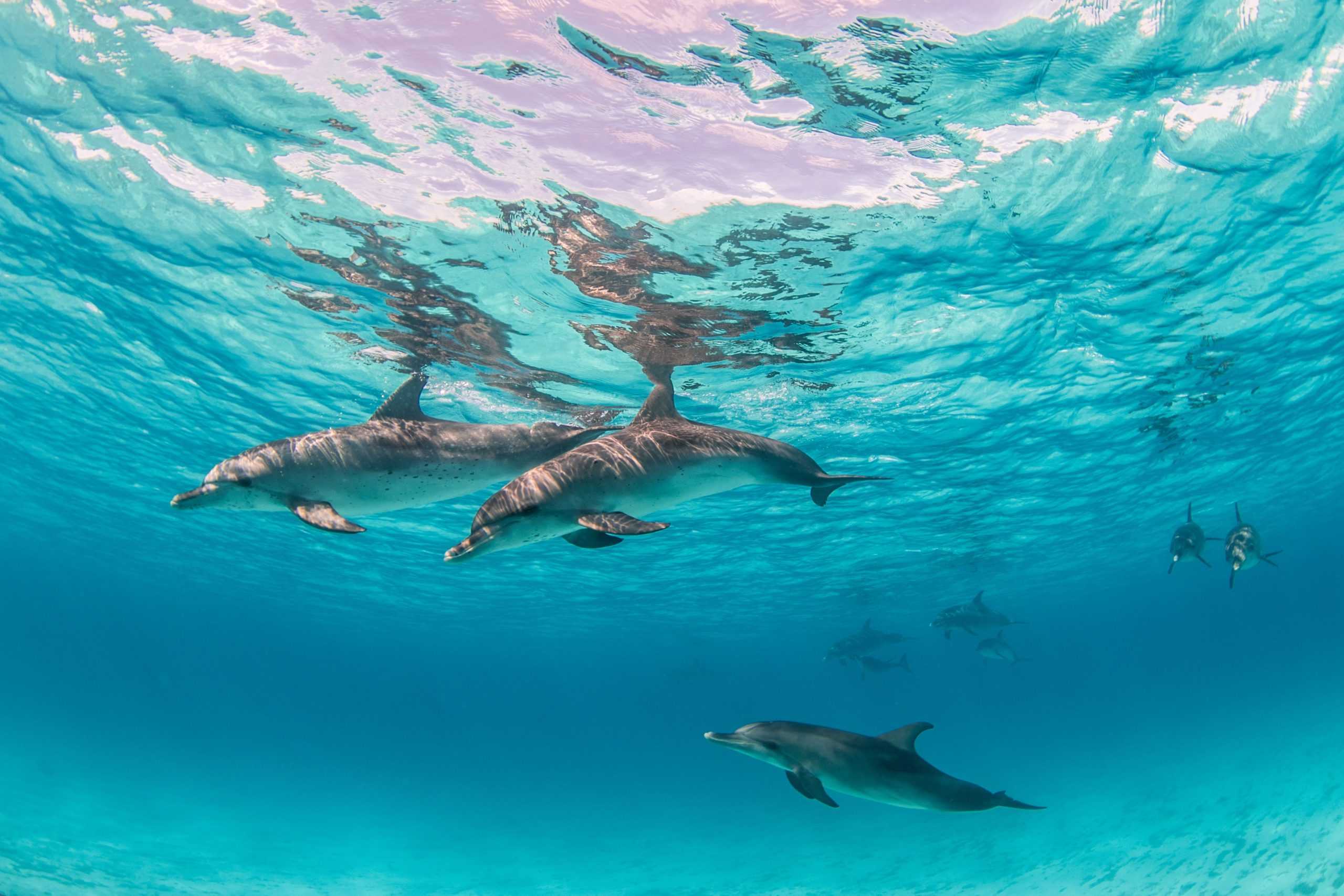 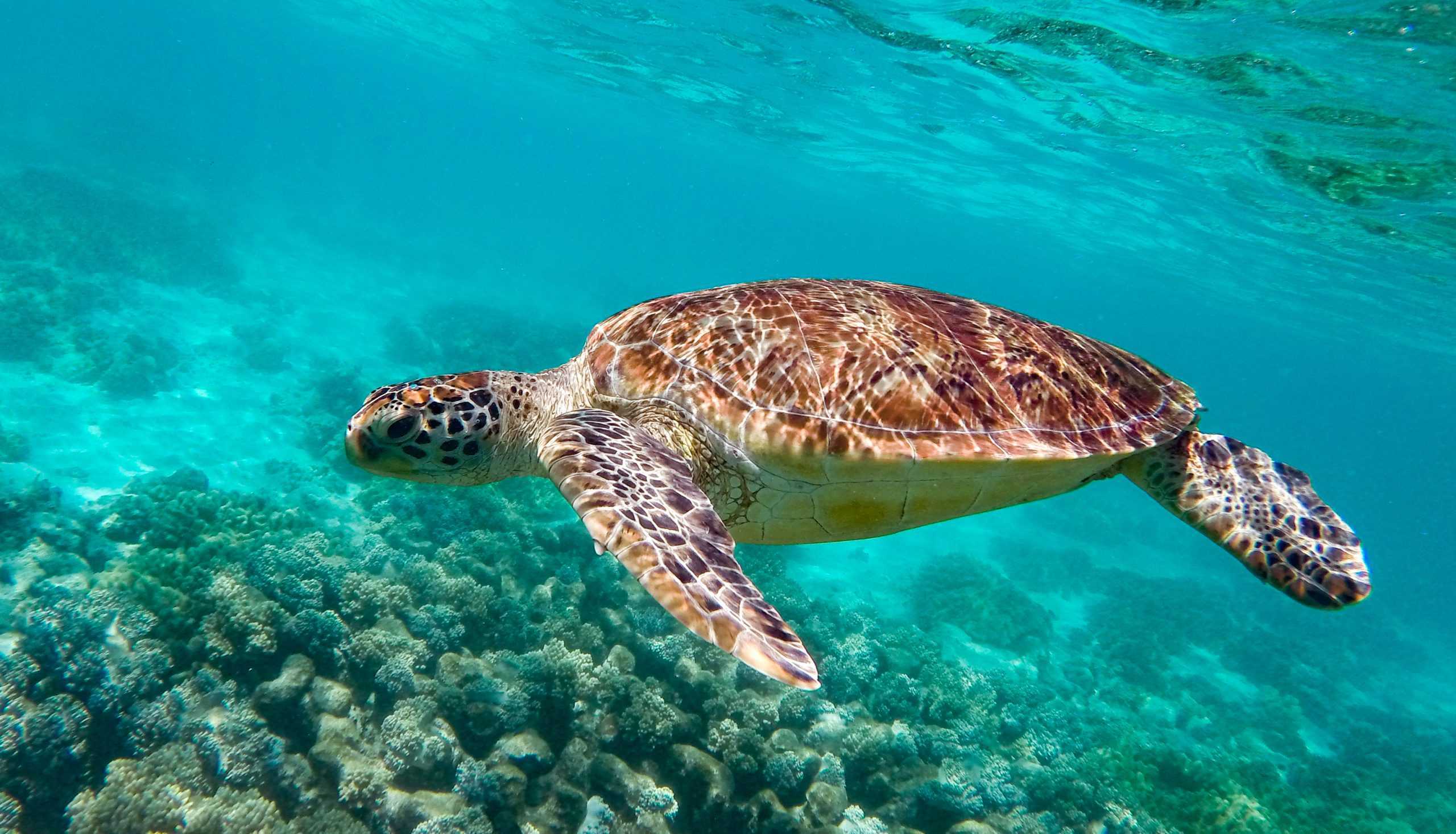 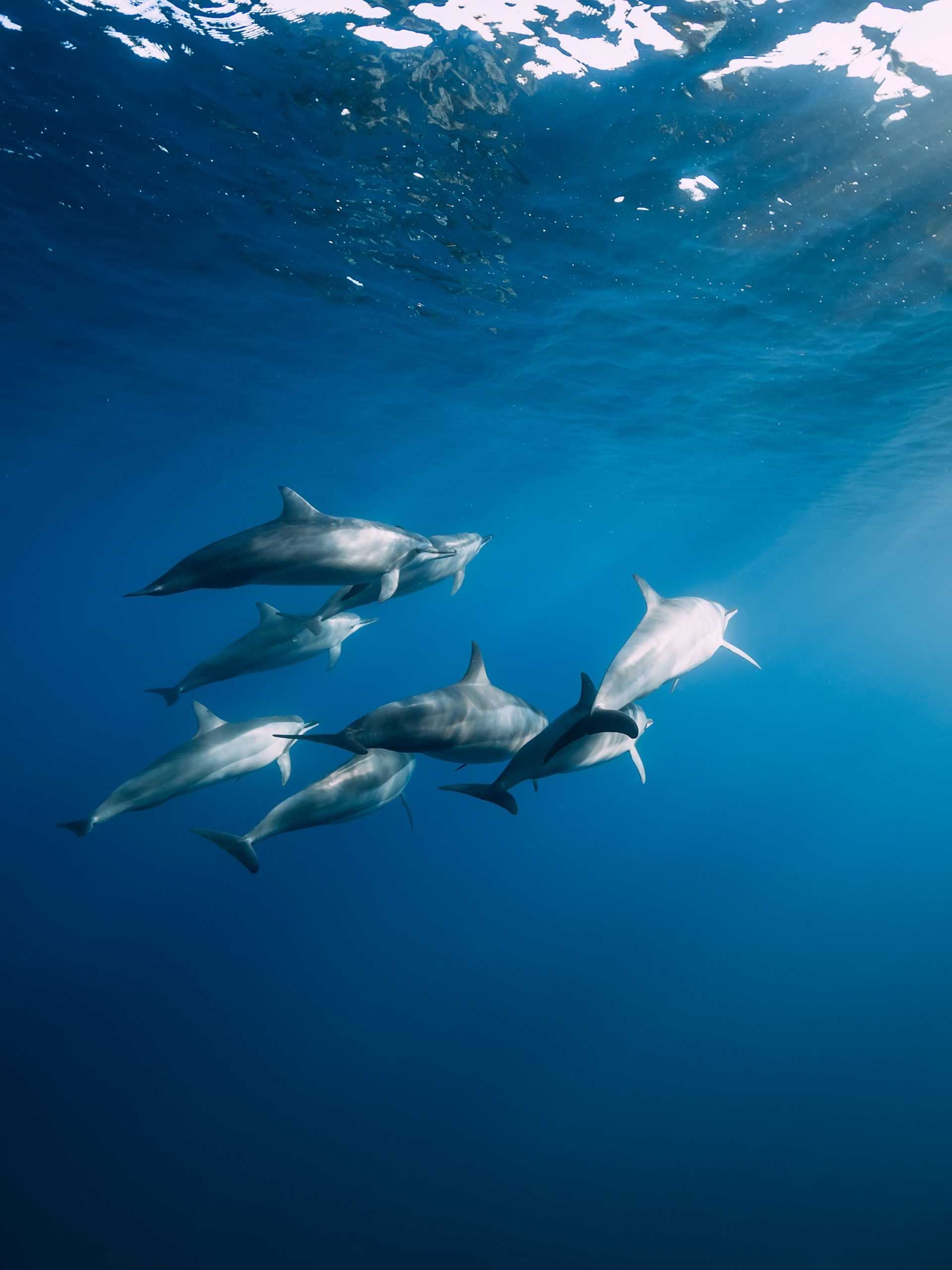 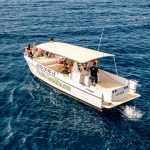 Bookings must be completed 48 hours before the date of departure on sea.

Booking days are susceptible to modifications, and are selected for information purposes only, don’t hesitate contacting us before your reservation or from the moment of its confirmation to make sure it will be carried out, by contacting us at +596 696 78 95 15.

Watch turtles in Martinique and take a look at the seabed.

Discover the sea turtles of Martinique in their natural environment.

After departing from Anse-à-l’âne, Trois-Îlets, our captain will take you to the Caribbean Sea passing through the Diamond rock. During this excursion you will discover the coral reefs and the species they shelter. We will take a break to swim in an area valued by sea turtles, an environment rich in meadows where we will be able to see them in their feeding environment.  Our approach is to be observers, which makes it very important to observe a behaviour of respect to fauna and flora, so we won’t disturb their habits.

We advise you bring swimwear so you won’t miss a swim rich in excitement. Our team will supply equipment such as masks, snorkels and fins. We will conclude the afternoon with a relaxing moment to enjoy some alcoholic, or non-alcoholic drinks, and snacks at the meeting place. The return is planned to be around 17h.

Everything you have to know about sea turtles

The sea turtle of Martinique is an endangered species we find in the Caribbean Sea. You can identify the turtles by their black and green shell. Their normal size is around 60 cm length and they weigh around 45 kg. We can find them in shallow waters, where they feed of seaweed and algae.

The sea turtle of Martinique is important for the environment because it contributes to the maintenance and good health of seaweed. They play an important role in maintaining the equilibrium in the ecosystem. The sea urchin, for example, could multiply and damage the seaweed if there were no turtles to eat them.

Turtles are equally important for humans. They are a fundamental element of the local culture and sea tourism. The inhabitants of the Caribbean have considered turtles as symbol of fertility and good luck for many centuries.

The different species of turtles in Martinique

Each species has its own features. The green turtle is the largest one of the three, and it can weigh up to 250 kg. It is also the slowest one of the three and prefers living in deep waters. The hawksbill sea turtle is the smaller than the green turtle and can weigh up to 100 kg. It swims fast and lives mostly in shallow waters rather than deep waters. The loggerhead turtle is larger than the hawksbill sea turtle but smaller than the green sea turtle.  It’s the only species that prefers living in sweet waters, that it reaches through the estuaries.

When do the turtles of Martinique lay their eggs?

The sea turtles of Martinique lay their eggs during the period between April and October. The laying egg period is then followed by a winter rest period, from November to March. During said sleep period, the turtles travel long distances around the Caribbean Sea without feeding. The females return where they laid their eggs for the following 2 to 3 years, depending on the species, and lay around 20 to 80 eggs every trip.

The female digs a whole with her back legs and then starts laying the eggs. The female lays normally between 25 to 60 eggs at a time. Then it covers the whole with sand before returning to the sea.

Normally, turtles come to Martinique between February and November, when food is abundant. It’s during these months when it’s easy to spot them. The nesting period takes place mainly during the night, under the moonlight, between April and November.

Where to spot the sea turtles of Martinique

If you wish to see the sea turtles of Martinique, there are certain places you can visit. The most famous place to visit is the beach of Grande Anse D’Arlet There is also a small sea turtle sanctuary in the city of Trois îlets.

The most common turtle species in Martinique is the green sea turtle, it can be frequently spotted swimming in coastal waters near the shore of Anse Mitan, and Anse Cafard. When they are young, we find them in less deep waters, but as they get older, they spend more time in deep waters. They feed of seaweed and algae.

The hawksbill sea turtle prefers the more protected bays of Carbet or François, whereas it’s rare to spot them a loggerhead sea turtle; we normally find them between 30 to 100m depth around the coasts of Martinique.

How to watch a sea turtle of Martinique?

Martinique shelters two protected areas for sea turtles: one for green turtles and the other one for the hawksbill sea turtles. The biosphere reserve of Martinique, that covers the adjacent sea and land areas, shelters turtles as well.

Martinique is part of the French Committee for the preservation of sea turtles. The Committee was founded in 1985 by those interested in preserving sea turtles. Its mission is to study and protect endangered species. Its actions are targeted to research, education and monitoring of sea turtles in the Caribbean.

With 21 species identified, the coasts of Martinique are a privileged habitat for the feeding, reproduction, and migration of marine mammals. The populations residing or passing by represent a headcount and diversity that guarantees a strong probability of sightings and an attraction rich in emotions for spectators.

However, the continuous ever-growing approach of vessels and the wrong treatment of animals represent a real threat to the population of local cetaceans. A charter that specifies the best practices for approaching and sighting of cetaceans in Martinique was thus drafted with the following objectives

Our Clients are Talking About Us

Depart on the discovery of hundreds of dolphins and other cetaceans passing by through our waters. And if you get lucky, during February or March, you may have a beautiful encounter with whales!